There are many benefits to a tiny house, including massive flexibility, a less commercialized lifestyle and the fact that they are cheaper than standard houses. However the majority of tiny homes only have a single bedroom, which means that you could start to outgrow your tiny home if your family expands. If you are expecting a child, or you have recently had one (congratulations, by the way!), then a separate bedroom will become increasingly important. Equally, you might want a friend or family member to stay for a few nights.

So is it possible to have multiple bedrooms in what is – by definition – a tiny house (i.e. one that is designed to be tiny)? Thankfully the answer is yes. You could ensure that any second loft area is big enough for a bed, or add a pull-down bed (or convertible couch) in your living room area, for example.

There are other options too, along with some considerations you need to be mindful of, which this article explores.

Whilst every house can naturally be built differently, a typical one-bedroom tiny house involves coming through the front door into the living area. The next room/space will be the kitchen/dining area, and then the bathroom will be behind this. Then there will be a large loft area which has space for a big bed. An example of this is the Tumbleweed Farallon 26’ Vista L1 house: 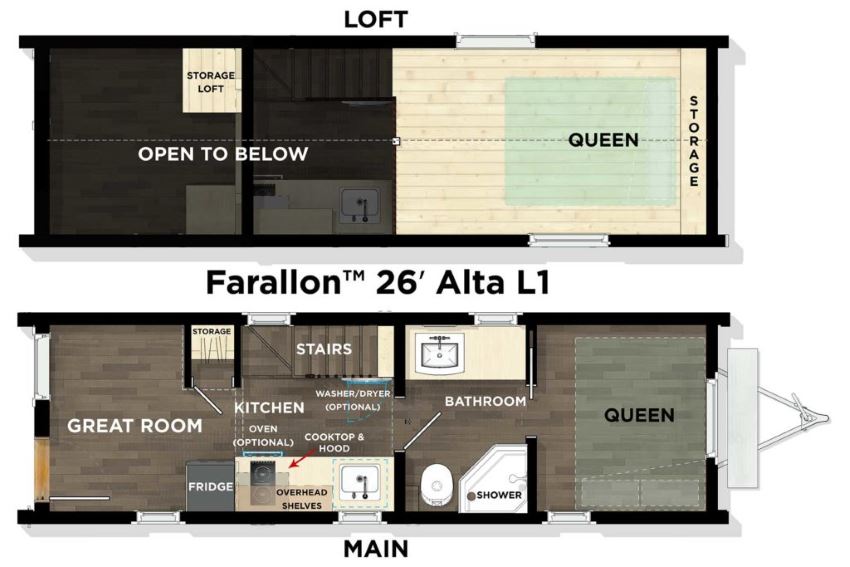 This is a fairly good layout because the living room can have a large ceiling (unless there is a full loft above) giving the feeling of more available space, and then the water/drainage pipework can mainly be managed at a central place towards the back of the tiny house. So where can a second – or even third – bedroom be added? Possible locations include:

What we mention above are the main ‘proper’ options, especially where longer term bedroom/sleeping space is required. We explore these options in more detail below, however if you only need some extra space as a temporary measure then the following should also work: 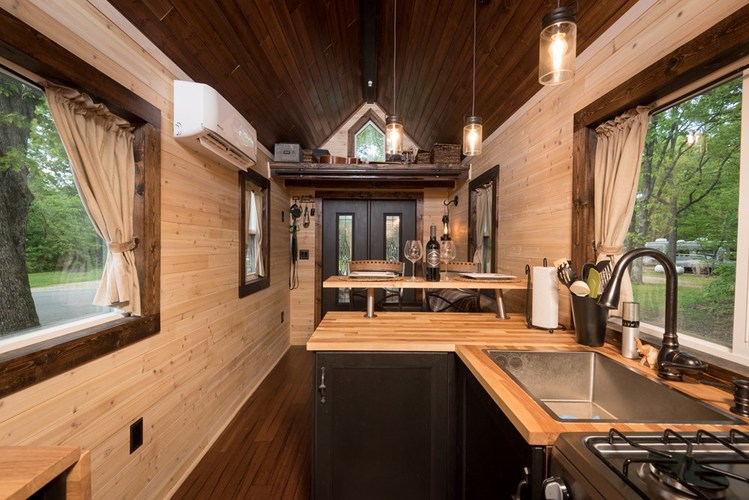 Converting this small loft area into a larger loft which can fit a bed (whether it is a single bed, or a larger double/queen bed) will therefore mean that some adjustments are needed. Assuming the roof space over this ‘second’ loft is too low, either raising the whole roof height or installing a dormer window are probably your best options.

Then there is the question of how to access this area. A permanent staircase would almost certainly use up too much room, so a ladder is your best option. But how can you stop this getting in the way? After all, this ladder would either come down right by the front door or in the middle of the kitchen (in a standard tiny house).

Well you can install a ‘rolling ladder’ by installing it on a castor/rail, which will allow you to move this to the side (out of the way) when you do not need it. Alternatively, a fold-up ladder (like standard houses use when you access the loft) is also an option, although this does require a couple of square foot free in the new loft bedroom for the ladder to stored when it is collapsed.

Having a second loft bedroom could be a effective option, especially if you built this from the start. However, extending the loft space after the tiny house has already been built will be more expensive, and disruptive.

Installing a wall-mounted pull-down bed downstairs can be a really good option which is sometimes overlooked. Some people seem concerned that they are either too difficult to pull down, or too easy: i.e. that they might fall down by accident. However modern pull-down beds are perfectly safe, and they are also easy to pull down.

The other main concern is that there will not be any space for the bed once it is pulled down, due to furniture below it. This is because they can be installed so that they sit over the top of furniture (click on the image to zoom in):

In the 3rd/4th images above, you will see that the small backrest of the existing couch was removed before the bed was pulled down (which is only a minor inconvenience, but some people might not want to remove this each time). Hence the 1st/2nd images which show that the pull-down bed which does not interfere with any other furniture.

This can be a really good option which does not require big, expensive structural adjustments to your existing tiny house building. Plus the bed can be larger with a fairly good mattress, unlike some other options where the bed or mattress must be compromised on.

The next option is probably the most obvious/common, especially if your budget is limited: have a convertible couch. This might take the form of a pull-out couch which is most popular, but ‘couch beds’ (or ‘day beds’) are starting to be seen more too – such as the IKEA Hemnes couch bed seen here:

The benefit of a bed like that is that it can be a single bed, a double bed or a normal couch: and multi-purpose furniture is always handy in a tiny house. The downside of this type of couch/bed is that they take up more space than a normal pull-out couch, and more space than a single bed too. So there is a trade-off, and be sure to measure up before buying one!

Whatever couch you end up going for, we would always recommend that you check there is enough space to lie down fully. There is nothing worse than a night’s sleep where you are curled up and uncomfortable (due to limited space), and having a sore back the following morning!

If you are just starting out on your tiny house journey, we would probably recommend buying a pull-out couch even if you do not plan on having guests or expanding your family: you never know when a couch-bed will come in handy.

If you know that you will need a multi-bedroom tiny house up front, consider paying a bit extra and getting a bigger tiny home with a dedicated downstairs bedroom (or an adjusted downstairs layout with a smaller bathroom, which makes room for a twin bed area). Quite a few of the Tumbleweed models offer this, such as the Tumbleweed Farallon 26’ Alta L1 house which (unlike the Farallon Vista we shown earlier) has space for a queen size bed due to the smaller bathroom/utility room areas: 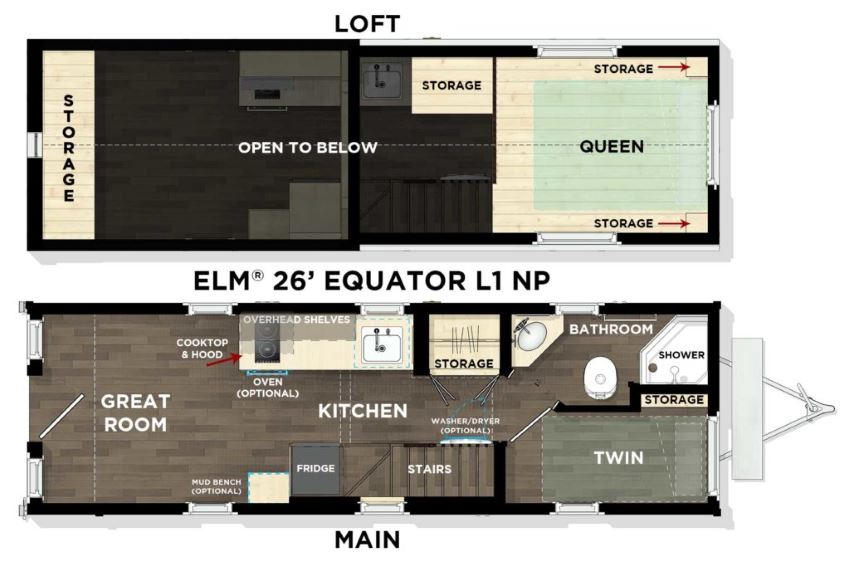 Whereas their Elm model has space for a twin bed in their 26’ mode… (shown above).

Other tiny house builders (or floor plan suppliers) also offer similar options, albeit extra bedrooms do tend to come at an added cost.

If your tiny house is already built, then it is trickier to follow this particular option. However hopefully the floor plans above show how you can fit in a downstairs bedroom. Reducing the size of the bathroom (and possibly kitchen/living area) could buy you just enough space for a twin bed.

Considerations When Increasing Your House Size

Option #1 mentions about the possible need to increase the height of your ceiling/roofline, whilst option #4 discusses getting a bigger tiny house which naturally supports 2 (or even 3) bedrooms. Obviously the more space you have, the better and more comfortable your extra bedrooms can be.

However, there are practical considerations to think about when increasing the overall size of your tiny house. The main one is whether you will fall foul of local zoning/building codes (especially for tiny houses on a fixed concrete base), or whether they can be transported easily on the roads (for THOWs).

For example, tiny houses which are wider than 8.5 foot (2.6 metres), longer than 40 foot (12.2 metres) or taller than 13.5 foot (4.1 metres) from the ground usually need a special permit before they are transported on the roads in America. So if you were planning on making your tiny house a little bigger to accommodate a second (or third) bedroom, just be sure to see whether you will exceed the usual road-transport sizes. If you do, however, then do not worry: you can still transport it; there will just be more paperwork (and costs).

If you have not got a THOW, you will probably find that most fixed-base tiny houses will have required zoning/building codes anyway, although just be sure to check whether you will exceed any limits by going for a bigger size tiny house than you were originally planning.

If your tiny house is already built, this option will probably be more expensive than including this when you are first building your home. This is because you will have to modify the existing timber supports, which will be fairly disruptive to an already-built (and decorated) house.

With that said, the costs will be in the thousands either way: probably $1,000 to $4,000 (including the ladder up, furniture, storage and any decoration) depending on exactly what needs to be done. This assumes that you do not need to modify your downstairs layout, nor your roofline. If you need to raise your roofline (or add a dormer window), this could easily be another $4,000+ unfortunately.

However like with many things, you can get them cheaper (or more expensive). We have seen DIY wall beds built for $150 based on plans which cost the same as two lattes ($9.99)!

This is the most cost effective solution for gaining multiple sleeping areas in your tiny house. A pull-out couch or couch bed will cost hundreds of dollars, and should rarely be more than $1,000 unless you want something high-spec.

You could always consider getting one second hand, too, since second hand couchs are much cheaper than the brand-new prices. As long as the couch is good quality and you inspect it before buying, this could be a very cheap option.

Having said that, the IKEA HEMES daybed that we mentioned earlier is currently just $299 brand new (although do note that the mattress size is custom to IKEA, so you will need to spend $90-$200 more on a single or twin mattress).

Just like option 1, if you are modifying an existing building then this will be more expensive than planning in a separate building from the start. Indeed, the Tumbleweed Farallon is the same price whether you go for the Alta layout (with a downstairs queen bed) or the Vista (with the separate bathroom and utility room). Even if there is an extra cost (when initially building/buying your tiny house), it will likely only be a couple of thousand dollars for the extra room downstairs.

However modifying an existing building to have a completely new room (and hence a smaller bathroom, kitchen and/or living room area) will likely cost many thousands of dollars – if not $10,000+. This is because rearranging your rooms naturally will involve ripping down and rebuilding walls, almost certainly moving electrical cabling, and possibly moving/re-plumbing pipework as well.

Max Size & Weight For A Tiny House On Wheels Without Permits

How Often Can You Move A Tiny House?