Deciding which way your backyard office shed should face is a key decision, but it is one that people often overlook. You might face the front of the office northward to prevent sun being in your eyes whilst you work, only to find that you have lots of sun glare on your screen throughout the day (if you have a back window)! Equally, you might live in a warm area, meaning that positioning your office in a way where sunlight does not stream through your windows will be key.

So what direction should your backyard office shed face? A south-facing office front will mean that your office will be bathed in sunlight throughout the day, warming the office but meaning you need to consider where to sit. A north-facing office front might be gloomier and colder throughout the day, but sunlight can still stream in – especially in the afternoon. So what about east and west? These can be good options, but it also (annoyingly!) depends on where you plan to sit, and where your windows are.

Contents hide
The South Is Sunnier Than The North
So Which Way Should My Backyard Office Face?
It Is Not All About The Sun!
What Is The Northern Hemisphere?
The Sun In The Southern Hemisphere

The South Is Sunnier Than The North

As a general rule for anyone who lives in the northern hemisphere (more on this later), the south is sunnier than the north. You may have heard that the ‘sun rises in the east and sets in the west’ and this is completely correct, but if you find this hard to visualize all it means is that the sun is a bit like a clock that starts at 9pm and finishes at 9 am (moving clockwise): 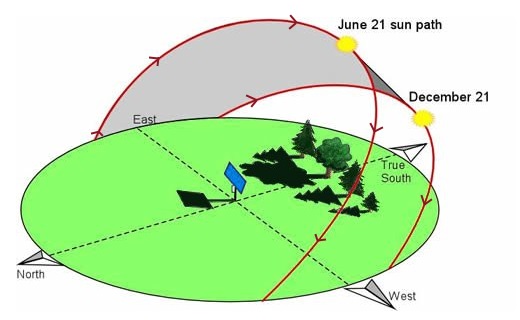 Naturally, the sun does not rise at 9 pm and set at 9 am; we purely mention the clock comparison to demonstrate how the sun moves. What this all means is that the sun is pretty constantly shining on south-facing objects throughout the day, whilst north-facing objects do not get as much sunlight.

You may have noticed this with your house – if the front of your house faces south, any rooms in the front of your house will be lighter and warmer than your back rooms. Equally a backyard that faces north will struggle to get sunlight (especially since the house will also cast shade onto the backyard since the sunlight is mainly hitting the front of the house). It is worth pointing out that north-facing rooms and backyards will get some sunlight – particularly during the late afternoon and early evening – but nowhere near as much as south-facing rooms/backyard.

So Which Way Should My Backyard Office Face?

In terms of positioning your backyard office to maximize or minimize the sun, this depends on three main things:

Assuming your largest windows are at the front of your office shed, a south-facing backyard office will be bathed in sunlight for pretty much all the working day (assuming it is a sunny day, of course!). This will be great if you plan on putting your desk facing east or west, because the sunlight should not get in your eyes too much – nor should it cause glare on your monitor. However, you will also need to factor in where you live and whether it is generally warm or cold. If you are lucky enough to live in a really warm area, you might want to position your office so that the main windows face north, or try and position it near a shaded area.

The reverse is naturally true for a north-facing office shed: it will not get much sunlight and so it will feel a bit colder and gloomier in general. But as long as your insulation (or heater) is good and you buy a good light or two, the problem of having constant glare in your eyes and on your monitor is solved!

What about east and west though? Well facing your office in these directions also has some pros and cons. Facing it to the east (or south-east, for example) will mean that you should get a lot of sunlight during the morning but very little in the afternoon. This is probably a perfect option for a night owl who hates mornings! After all, the sunlight will heat your backyard office whilst you lie-in and have a leisurely breakfast, then you can go into a warm office later on without worrying about sun glare!

And, at the risk of repeating ourselves: the reverse is also true for a west-facing backyard office! This might be better suited to an early bird since you will not have to worry about sunlight in your eyes throughout the morning… although you might find the office a bit chilly first thing!

Finally, we have mainly talked about considering where the sun will be with respect to your large front windows. However, you might have other windows too, and you will need to think about whether sunlight will stream through these and into your eyes (or onto your monitor) at peak times throughout the day too. Hence before you put up the walls of your dream office, we would always suggest you do two things:

It Is Not All About The Sun!

We have spoken a lot about the sun, and it would be great if we had 365 days a year of the sun from dusk until dawn! But unfortunately, rain and wind need to be considered, especially stormy weather.

If you have a lot of stormy weather, try and find out which direction this comes from. Some areas see heavy rain and wind coming from the southeast, for example, meaning that if you face your office shed southeast you might have a muddy walk to and from your backyard office! Equally, you might find the sound of heavy rain hitting your front windows all day quite off-putting (although you obviously cannot do much about the rain hitting your roof!).

If your area tends to rain a lot, a south-facing office might be the best idea overall because this will help to dry both the wall siding, but also the mud/ground underneath it.

In other words, when deciding where to place your backyard office, both the sun and wind/rain needs considerating: meaning that the decision can be tricky! A lot of it depends on the area you live in, to be honest. If you have a lot of sun, this will be the key driver for your decision – and similarly if you have lots of storms.

What Is The Northern Hemisphere?

We mentioned at the start of the article that the sun rises in the east and sets in the west in the northern hemisphere. This is an important point to note: if you live in Australia or New Zealand, please go back and read the article again, but replace the word “south” for “north” (and vice versa)! Just kidding – the section below covers the southern hemisphere where Australians, New Zealanders (et al) live.

So if you are reading this article then there is a 90% chance that you live in the northern hemisphere and the advice given definitely applies to you! But for the remaining 10%…

The Sun In The Southern Hemisphere

You might have already guessed this, but in the Southern Hemisphere the sun rises in the west and it sets in the east. Or to use our clock analogy, the sun will rise at 9am and then move anticlockwise around to 9pm.

So whilst we joked earlier, if you read this article again but change “north” for “south” and “east” for “west”, the advice all still applies!

Backyard Office With (Really Useful) Lofts: What To Consider